Facts and figures about Fort Gordons impact on the CSRA 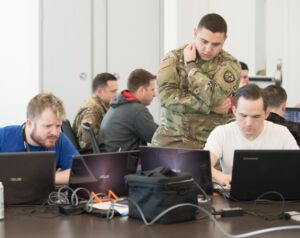 Fort Gordon remains the CSRAs largest employer with 31,874 military, civilian and contractor employees. Using a conservative Dept of Commerce multiplier of 2:1 this equates to 63,748 community jobs as a result of Fort Gordon. The estimated total economic impact is over $2.4B annually.

Fort Gordon is implementing more than 80 major construction and renovation projects worth nearly $2 billion projected over the next decade. For example, the $900-million Cyber Center Schoolhouse expansion includes a new building, renovation and modernization of existing facilities, and road, water and sewer improvements. Underway is a $50-million entry at Gate 6 that will widen a portion of Gordon Highway.

Army Cyber Headquarters is in Fortitude Hall on Fort Gordon; this state-of-the-art 336,000-square-foot facility, with a construction and infrastructure fit-out cost of approximately $366 million, is the culmination of plans begun in 2013 when Army officials first directed that ARCYBER consolidate functions at Fort Gordon as part of plans to bring cyberspace operations, capability development, training and education together at one location. The move unites Army Cyber organizations that were spread across multiple facilities at three Army installations in three states, providing a focal point for command and control of round-the-clock global operations conducted by ARCYBER’s staff and subordinate units.

About 800-1200 service members separate from the military at Fort Gordon each year. These are primarily highly skilled information technology or medical professionals. Surveys show about half plan to or would like to remain in Augusta area if there were jobs available.

Fort Gordon is one of only two Army installations that was not cut during the Army’s drawdown, and in fact is growing by over 4300 personnel by FY23. There is over $1.6B in planned infrastructure investments through 2028.

Area school districts receive over $1.2M annually in impact aid, which is funding provided by the Department of Education to compensate for federal employees who do not pay property or GA state taxes because they live in government housing or are out-of-state residents.

As part of the planned modernization to meet the growth and increase in mission requirements of Fort Gordon, there is $1.6B in planned infrastructure investments through 2028.

Fort Gordon is one of 2 military installations selected for the Municipal Services Pilot Program.  Underway multi-million dollar project at Gate 6 that will widen a portion of Gordon Highway.

Ft Gordon is home to the GA National Guards Youth Challenge Academy which is a program for high school dropouts, offering a chance to complete their GED and gain experience as responsible adults. Each session is 5 and a half months long and graduates over 200 students.

Fort Gordon has no encroachment issues. In 2010 Fort Gordon obtained approval of an Army Compatible Use Buffer (ACUB) proposal to protect against encroachment around the installation boundary. Fort Gordon and its primary partner, Central Savannah River Land Trust, have identified priority areas surrounding the installation in which to acquire conservation easements under the ACUB program. The Fort Gordon ACUB is approved for a total amount of $16,458,000 (subject to availability of funds) and currently has $936,102 dollars of funding in place to implement the proposal with a goal of protecting up to 11,900 acres in Richmond, Columbia, McDuffie and Jefferson counties. The FY13 focus – 1,618 acres in Richmond and McDuffie Counties comprised of 17 individual parcels. Additionally, Fort Gordon completed JLUS studies in August of 2005 and July of 2019. As a result of the study the four counties that Fort Gordon occupies have agreed to direct development in ways that will allow Fort Gordons mission to continue without conflicts with land use outside the installation.

In 2002, Richmond County invested $8.6M to build Freedom Park Elementary School (K-5) on Fort Gordon and added a middle school (6-8) wing in 2008 at a cost of $5.8M. The school currently supports 855 students of on-post military residents and has won numerous awards to include a National Blue-Ribbon School since 2007, GA School of Excellence since 2007, and in 2011 was one of only 4 schools selected in the U.S. as a National Model School.

Fort Gordon has provided 750 acres in partnership with Georgia Power for a 30-megawatt solar energy project, the largest Department of Defense solar project to date.

Ft Gordon has requested a new access gate off Gordon Highway west of gate 2 (Robinson Ave) to accommodate recent growth. It was approved by Congress and inserted into the Army Military Construction Priority List for FY2018. Once completed, gates 2 and 3 (commercial access near gate 2) will likely be closed. The new gate is scheduled to be completed in the summer of 2021.